His driver Yasin Kawuma was shot dead on Aug. 13. Wine tweeted a graphic picture he said was of the man’s dead body. Wine says police were the ones who shot Kawuma, but Wine says he was their real target.

Bobi Wine’s real name is Robert Kyagulanyi Ssentamu. He rose to fame as a musician — first with love songs and dance songs, but more recently turned to political themes in his music. His 2017 song “Freedom” has become a rallying cry for the country’s opposition.

In the same year, Wine was elected to the country’s Parliament as an independent.

“We are living in a country where life does not mean a thing,” Wine tells NPR’s Scott Simon.

Wine came into NPR’s offices in Washington, D.C. this week. He was walking with a crutch. “I’m feeling pain in my back, in my shoulders, in various parts of my body. But my spirit is high and I don’t think about pain anymore,” he says. 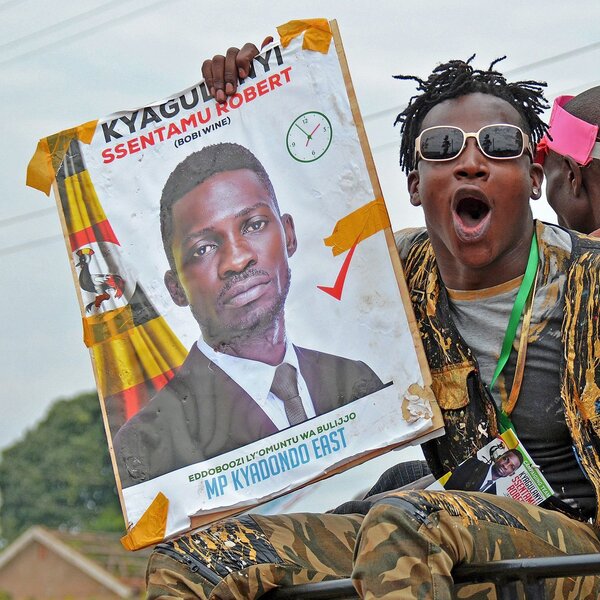 He was arrested in mid-August after clashes between opposition supporters and supporters of Uganda’s ruling party. Security forces accused Wine of fomenting the violence and arrested him. Wine was later released and promptly rearrested and charged with treason, along with 33 others, according to Amnesty International.

Wine says security forces beat him severely and tortured him. He wrote on Facebookthat soldiers broke down the door of a hotel room where he had holed up and beat him with an iron bar, then dragged him into a vehicle and continued to beat him.

Wine tells NPR it was the soldiers of the Special Forces Command, a group that guards the president, who “kicked me, beat me everywhere and did despicable things to me. They squeezed my testicles, they hit me with gun butts, when I screamed they rapped my head again and hit me so hard on the back of the head until I was unconscious.”

Uganda’s security minister, Gen. Elly Tumwine, told The Washington Post that Wine and others “fought with the ones who arrested them, and that’s what caused their ailments,” adding that a “medical examination found there wasn’t much.”

Government spokesperson Ofwono Opondo P’Odel said in a statement that Wine “is before courts of law in Uganda for treason and inciting violence, and no doubt, his lawyer[s] Bob Amsterdam and others are trying to get him off the hook by employing diversionary tactics in raising the tantalizing, although unproven, allegations of torture.”

Wine was eventually allowed to leave the country. He came to the U.S. for medical treatment, and held a news conference this week to encourage halting U.S. military aid to Uganda.

He talked more about U.S. aid to Uganda and his plans to return to the country, despite the risks, with Simon on Weekend Edition.